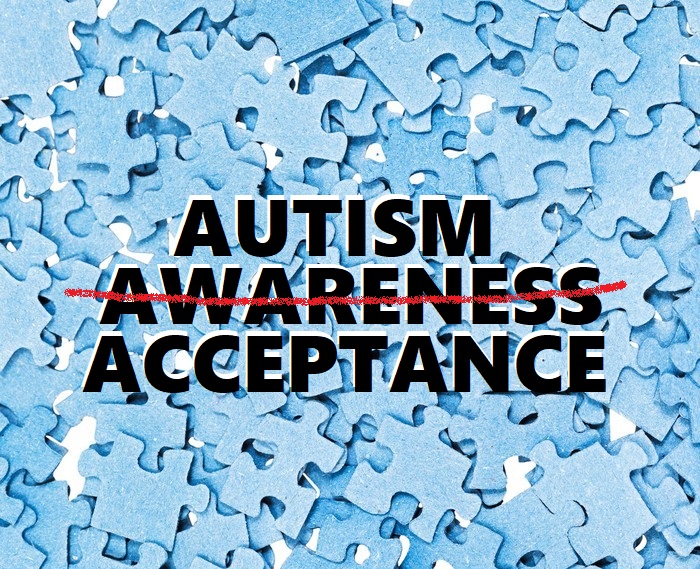 In the 1970s, few people knew what autism was, so parents of children with Autistm began public education campaigns. During this time, Autism was presented as a disease that needed to be cured. Documentaries included parent interviews about how burdensome their child was. Many new organizations and charities funded researchers to find the cause of Autism and demanded a cure. Mainstream media portrayed Autism with two negative stereotypes, usually a non-verbal kid flapping and rocking in the corner, and a nerdy, awkward computer-genius that can’t make eye contact.

Present Day, most people now know that autistics exist… but still view them very negative terms. The increase of children being diagnosed is described as an epidemic.

It’s time for this conversation to change. It’s time to stop the “Awareness” campaigns and start focusing on “Acceptance”. Instead of viewing Autism as a genetic defect… we should encourage the view that Autism is a natural variation in the human brain. If a stranger sees a child screaming in a grocery store, they shouldn’t automatically assume that the child needs discipline. Hopefully, they consider that the child is communicating that he needs help.

Success On The Spectrum is a national Autism treatment franchise that celebrates the differences of Autistic people. We recognize that children with Autism learn differently than neurotypical kids. Our play-based ABA therapy is simply a method of teaching that is different than the typical American school system. We don’t force the children to sit in desks for several hours. We don’t give written tests and compare one child’s success to another child’s failure. We understand that flapping hands is not embarrassing, but can be an expression of happiness. We do not wish to “cure” a child or restrain them from displaying autistic behaviors. Our goal is to teach them the language and social skills that they need to achieve the highest quality of life possible.

On April 6th 2021, SOS celebrated children’s differences for Autism Acceptance Month. The exciting event was generously co-hosted by the FOMO Factory. Just as two kids with the same diagnosis “look” very different (when it comes to their behaviors and abilities), the FOMO Factory has multiple rooms, all decorated differently, that are equally beautiful and enjoyable. Each environment is designed to stimulate all 5 senses.

The Cosplay Alliance attended the event. They dressed as Disney Princesses and superheros. The children were overjoyed.

It was a joyous event that promoted inclusion. The kids had a BLAST and will remember this forever.